The world is looking a little more difficult to navigate, especially if you’re a college student in 2020. You’re supposed to be out living life to the fullest and cramming for tests. The last time we had problems like these (if you listened in history class) was the Spanish Flu of 1918. Of course, back …

Read moreHow to Get Through College 2020 During the Pandemic 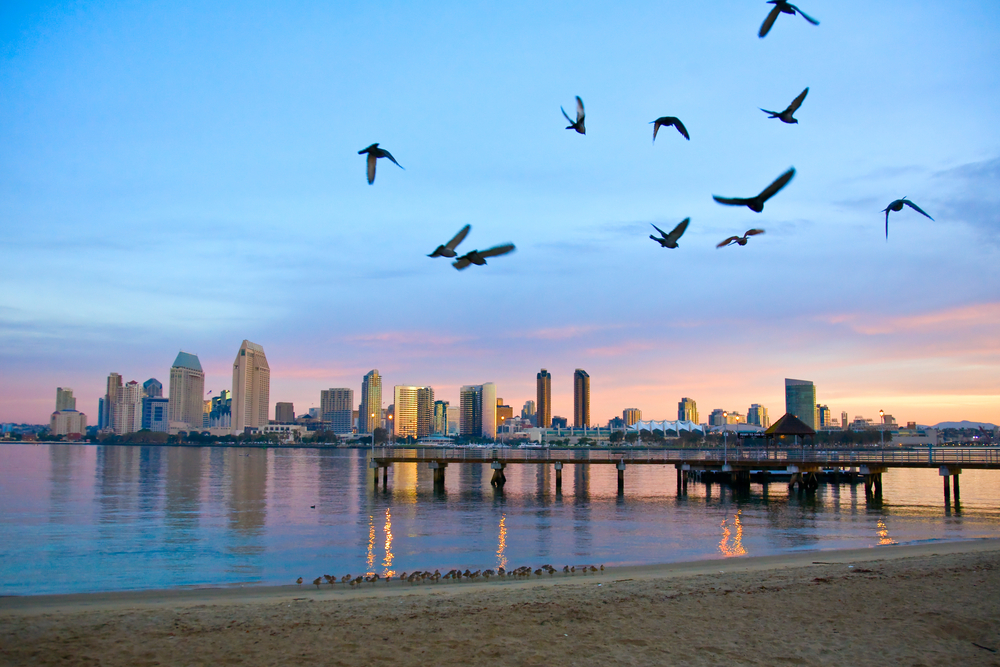 As a city, San Diego is extremely diverse with a wide variety of people, places, and professions. There are so many pros to living here. At last count, there are 33 distinct neighborhoods in San Diego and 18 incorporated cities, all of whom share in the delight of its amazing weather, miles of white sandy …

Halloween is a time for embracing all things spooky. To our detriment, self storage facilities often get a bad rap for being places that under the guise of night, can make you question your senses (Did you see that? Did I just hear something?).  Now we can’t speak for all self storage businesses, but at …

Cheap rent, free utilities, and most likely, no neighbors. Sounds like the ideal living situation, right? Why spend a ton of money renting an apartment when you could just live in a storage unit at a fraction of the cost? Back in January of 2017, YouTube user, 007craft, posted his now-viral video titled “Living out …

When you think of Hollywood productions – elaborate sets, far-flung locations, impeccable detail – you don’t necessarily associate them with self storage. After all, most self storage facilities are utilitarian in appearance, as they’re built with a specific purpose in mind and not really camera-ready. So from a storage perspective, it’s exciting when a self storage setting is used a backdrop for even a brief moment. Here are some notable references in fictional media (TV and movies), and we’ll break down how accurate and inaccurate these depictions are:

Synopsis: Did you know? The Simpsons is the longest running American scripted primetime television series, having aired since 1989.  In this clip from the episode Day of the Jackanapes, Sideshow Bob is discovered writing a revenge manifesto from his storage unit at Broken Dreams Storage, planning to exact revenge on Krusty the Clown for mistreating him during his stint on The Krusty the Clown Show. It turns out that several tenants are openly doing the exact same thing from their storage units.

Fact: Despite being animated, nothing seems to be particularly off on how this storage facility appears. Sideshow Bob’s storage unit could use a little attention in the ceiling area. He should definitely contact the property manager to get that addressed.

Fiction: Animated shows automatically lend themselves to being over the top, and this is no exception. StorAmerica prohibits tenants from occupying their units, and we also have a strict policy against possessing weapons onsite (yes, even atom bombs). In fact, all storage facilities will have similar policies in place. And not seen in the clip, the property manager, Raphael, offers Sideshow Bob a $2 per day stay and “wake-up jab” using a broom. Funny, but definitely a no-no.

Synopsis: Geek culture have become mainstream, and The Big Bang Theory is proof of that, regularly bringing in huge ratings. From the season 9 episode, The Soldier Excursion Diversion, it’s revealed that Sheldon has a problem with letting things go – literally. The thought of throwing anything away makes him sick, to the point where he secretly saves everything and meticulously organizes those things inside a storage unit, which he calls the “Fortress of Shame.” He shares this long-teased secret with his girlfriend, Amy, who sympathizes with Sheldon and accepts him despite his problem.

Fact: A pretty accurate portrayal of a self-storage facility. It would take a significant amount of time to organize and label everything, but it’s within the realm of possibility.

Fiction: While the entire premise is somewhat unrealistic (it’s doubtful that someone would not throw anything away, ever), within the context of self storage, this is otherwise plausible. Some storage facilities — if they’re equipped —  place trash receptacles around the facility for customer use, but this is pretty rare.

Synopsis: In this Showtime dramedy about a woman diagnosed with terminal cancer, the series finale culminates with a scene that takes place after her death (spoiler alert). The late protagonist, Cathy Jamison, leaves a key to a storage unit for her son, Adam. Unknowing of the contents, Adam opens the unit to find a car and gifts for every birthday, holiday, and special occasion that she will miss…No, we’re not crying, you’re crying!

Fact: This mostly rings accurate. They even used a real storage company!

Fiction: While StorAmerica prohibits indoor storage of vehicles (due to ventilation concerns), some other facilities may allow it. Your mileage may vary, no pun intended. Also, StorAmerica requires the use of disc locks for security purposes (again, other storage companies may have different policies). The padlock used in the clip is easily breakable. If you’re going to store a nice new car and wrapped presents, we’d suggest a stronger lock.

Synopsis: This sitcom features a group of middle-aged, C-list, showbiz women who decide to settle in Cleveland, OH, after giving up on the L.A. lifestyle. In this episode, appropriately titled Storage Wars, the women participate in a storage auction where high-maintenance actress, Victoria Chase, sees value in the first unit up for auction, and her outrageous bid easily wins. Her intent is to appraise a rare looking painting that she spots, hoping the notoriety from that will overshadow her reputation for starring in an adult diapers commercial. The rest of the episode follows the women ensuing in the wackiness involving some of the items found in the storage unit.

Fact: Like all entries on this list, the circumstances surrounding the storage facility are varyingly far fetched, but it’s impressive how realistically the auction was handled. The “look, but don’t touch” rule was spot on (and the use of flashlights was a nice touch). You may also notice some real life cameos from the Storage Wars reality show.

Fiction: Inflating the bid from $25 straight to $3,000 is highly unlikely. But bonus points for Betty White.

Synopsis: This 2011 film stars Tom Hanks in both acting and directorial roles, portraying the titular character, Larry Crowne, who is out of work and down on his luck. In hopes of getting back on his feet and to become marketable at an older age, Larry enrolls in the local community college where he finds acceptance in a diverse pack of scooter-riding students. In the midst of his journey, Larry befriends his college instructor, Ms. Tainot (played by Julia Roberts), who is facing a similar crisis in terms of finding motivation and purpose in life. In this clip, Larry accompanies his friend, Talia, to her storage unit, where she stores a vast array of clothing. The first step in reinventing yourself is getting a new wardrobe.

Fact: We’ve seen tenants who store clothes, and only clothes, so this seems fairly true to life.

Fiction: We’ve also witnessed tenants undress and change their clothes in plain sight, so unfortunately, there’s not much fiction in this regard.

Synopsis: Perhaps considered one of the best television shows in history, Breaking Bad follows chemistry teacher-turned drug lord, Walter White, as he falls deeper and deeper into a morally ambiguous rabbit hole after being diagnosed with cancer. His motivation to provide for his family before he dies comes to a head in the episode Gliding Over All. Walter’s wife, Skylar, reluctantly becomes involved in his extremely lucrative meth operation, and resorts to storing piles of cash in a storage unit, as he is making too much money to launder inconspicuously. Walter is stunned at the sight, which prompts Skylar to ask him how much is enough, and at what cost?

Fact: While StorAmerica strongly advises against storing highly valuable items (for obvious reasons), there’s no hard rule against it. There have been stories of people finding bags of cash inside auction units, although finding any significant amount of cash would be statistically very, very low, and finding millions of dollars would be even lower.

Fiction: This looks legit, aside from the mountain of cash. But ask anyone who works in storage — the most overused joke from new tenants: So this is where I’ll store my dead bodies/meth lab! We wish that was fiction.

Synopsis: As arguably the coolest iteration of Agent 007 to date, Daniel Craig embodies James Bond effortlessly in the 3rd installment of this franchise reboot (uh, let’s just pretend Quantum of Solace never happened). In Skyfall, Bond finds himself at odds with the organization that employs him, MI6, as it becomes compromised, leaving Bond and his allies on the run and in pursuit of the inside threat. For the final showdown, Bond and his superior, M (played by Judi Dench), decide to lure the enemy to Skyfall, Bond’s remote family estate. How do they get there? With the Aston Martin DB5 that they pull out of a storage unit! Who would’ve thought James Bond uses self storage??

Fact: This one’s a little tricky as European self storage appears to be a completely different beast, and maybe plays by different rules. The doors slide left to right, vs. up and down, which is super British and not unlike driving on the left side of the road.

Fiction: It was a bit odd that the facility gate was wide open when they left, but we can chalk that up to Bond being a professional spy who can likely slip through anywhere with ease. At StorAmerica, we pride ourselves in having security measures in place at all of our facilities, but not even we could stop 007 from coming and going as he pleases. Sidenote: We wonder what else is in those boxes inside the storage unit. Spy gadgets? Perfectly tailored suits? Martini glasses?

Stay tuned for another edition of Storage: Fact vs. Fiction!