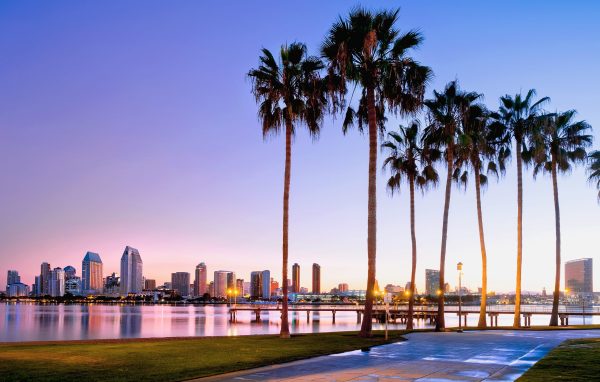 Catch a wave, lay in the sun, or enjoy miles of sandy beaches. Sound exciting? 120 miles south of Los Angeles sits the 8th largest city in the United States, San Diego, California. San Diego is the ‘Birthplace of California’, becoming part of the country 2 years after the Mexican-American War ended in 1848. There’s also another moniker that San Diego proudly assumes, that of ‘America’s Finest City’, and today we’re going to find out why. So sit back, relax, and join us as we explore the Pros and Cons of living in San Diego!

The Best “Moving to San Diego” Tip We Can Give You

If you’re moving to San Diego, but you haven’t found a place yet, renting a self-storage unit is an affordable option. It’s also a better option than storing your goods with a moving company as it’s more affordable and you’ll have access to your things if you need them. Here at CA storage, we have three locations in San Diego, so you’re sure to find something to fit your needs.

Balboa Park is the largest urban cultural park in the United States. It features opera, live symphonies, over a dozen museums and art galleries, and the Old Globe Theatre.  Then there’s the San Diego Zoo, gardens galore to explore, and over 7000 restaurants serving every flavor of food you can imagine.

San Diego is home to the San Diego Air and Space Museum, the Museum of Contemporary Art, and the New Children’s Museum, among others. And of course, the San Diego Symphony Orchestra, their hugely popular Summer Pops series, is held outdoors every year. Plus, no one will ever forget when the Beatles played at Balboa Stadium in August of 1965! If culture is your thing, San Diego’s got you covered.

Con- The Cost of Living

Unfortunately, San Diego has a higher cost of living in comparison to the rest of the United States. Home prices have gone up quite a bit in the last couple of decades, and even apartments are expensive. San Diego is still more affordable than other California cities. In fact, we wrote a whole other blog on the Cost of Living in San Deigo vs Los Angeles. Go see how San Deigo stacks up to LA!

Pro- The Beach and Surf Lifestyle

With some of the best beaches for surfing in the United States, San Diego is a surf and beach lovers dream. That relaxed vibe permeates through the city. San Deigo is a bit slower and less chaotic than other parts of California. The Pacific Ocean is particularly impressive when it comes to surfing. Surfing is a way of life here for many. Even if you aren’t into surfing, the ocean temperatures are practically perfect for swimming throughout most of the year.

Con- Parking in the City

Many San Diego residents use scooters and motorcycles because of the parking situation in the city, which is not what you would call ideal. Finding a parking spot isn’t as bad as, say, New York City, but it does take a bit of time and effort. Finding a free spot? That might take some work, so budget extra time if that’s your plan.

The public schools in San Diego are some of the best in the United States, with five school districts that rank in the top 30 in the state! If you’re planning on having a family, sending them to school in San Diego means your little ones will get a fantastic, well-rounded education. ABC’s indeed!

Any city with this many people is bound to have its fair share of traffic, and San Diego is no different. It’s ranked #40 of all the most significant metro areas in the country, however on you list of pros and cons of living in San Diego, it’s still bearable. Offsetting the traffic is the fact that the city is very walkable, so once you’re downtown, you can at least get around on foot and get some exercise!

Pro- Plenty of Opportunities to Bike

Not only does San Diego have plenty of biking trails, but it also matches them with spectacular views of the Pacific ocean as you ride. The Pacific Beach Boardwalk, is one of the most popular due to its prime people watching and plenty of places along the way to stop and relax.

If incredible views of the downtown area, cycling up Cabrillo National Monument is perfect. It’s not an easy goal, to be sure, but the spectacular views are well worth it. From Fiesta Island to Mission Trails Regional Park, Silver Strand, and Torrey Pines State Natural Reserve, San Diego is bicycling heaven.

Con- No Real Seasons to Speak Of

This far south in California, you’re not going to find a huge difference between winter, summer, spring, or autumn. Luckily, Mammoth Mountain, Big Bear, and Julian are close enough to get there by car and get all the snow and seasons you desire! We could go on for days about the San Diego weather, but when weighing the pros and cons of living in San Diego, we think this one is really up to you!

Things Don’t Always Go as Planned When Moving to San Diego… or Anywhere!

If you’re moving from across the country and something falls through on your lease or closing, don’t worry. It happens. The best thing you can do it not panic and sign on a place you don’t love. Store your things in an accessible self-storage unit. If you want to know more, chat with one of our friendly managers right now. CA Storage has a wide selection of different self-storage units ready and waiting. When you’re ready, reserve your storage unit with our easy online reservation system! Safe, secure, and close by, CA Storage is here to help when you need us.

San Diego is a Fantastic Place to Live!

We hope you enjoyed this list and that it helps you make your decision to move here. One thing is sure; once you do, you’ll never want to live anywhere else!

Check out these other articles about our favorite California locations: